Today we have a guest blog from would be traveller husband, Tim. Tim can often be found in a foreign country, beer in hand. Here are his top five beers from around the world, best served ice cold in their country of origin.

I was once asked for my 5 favourite beers, and I immediately drew a blank. I think that, as a lager drinker, there isn’t enough distinction between the different brands to really be able to say one is much better than another. As long as it’s cold, not a watery 4% ABV and the right colour, I’m usually happy. However, lager and I have had some incredible moments, but they weren’t made wholly by the beer.  I think, with lager, the key is the combination; it’s the right drink, in the right place, with the right people. So this post is more a book of short stories than a quick list of different drink manufacturers.

5. Duvel – Belgium (but drunk in France). It was the first night of an interrail trip around western Europe with my brother, Si. We were in the beautiful and historic city of Strasbourg in northeastern France. We had started the day in England in the early am, travelled all day to the far side of France and topped it off with an evening of walking the old town to see the spectacular cathedral and old waterside buildings. We were knackered. So we went into the first pub we saw, spotted a poster on the wall for a beer of ‘the right colour’ and, largely forgetting my high school French, pointed at the poster with a firm statement of ‘deux’. It worked! 2 beers were delivered, a quick cheers, and then, heaven. Now, Duvel isn’t one of my favourite beers, it’s brewed to a kick-in-the-pants 6.8% ABV, but this was the right moment for it. We got better at French as the night went on and ended having half a dozen Duvels each, before finding a Turkish man selling pizza and staggering back to the hotel.

4. Chang – Thailand. A very different story from Duvel. In my opinion, Chang is one of the finest beers in the world and had to be mentioned in this entry. I achieved peak Chang on the third day of a trip to Bangkok. I’d had an excellent, if extremely hot, day sightseeing and had been chilling out in a beautiful hotel in the Lumpini park region before dinner. We caught a taxi to an amazing restaurant called ‘Cabbages and Condoms‘ (read more on that here). After insisting the driver take an equivalent £2 in fare rather then the £1.50 he tried to charge, we took to our table and ordered a whole Thai banquet with drinks for what a main on its own would cost back home. My drink of choice was obviously Chang, and I paid the princely sum of roughly £1 for a bottle about 20% bigger than a pint. The restaurant was quirky but amazing, the food was excellent even by Thai standards and, sat in the late night heat with my newly acquired wife, I sipped on my lager a very happy man. 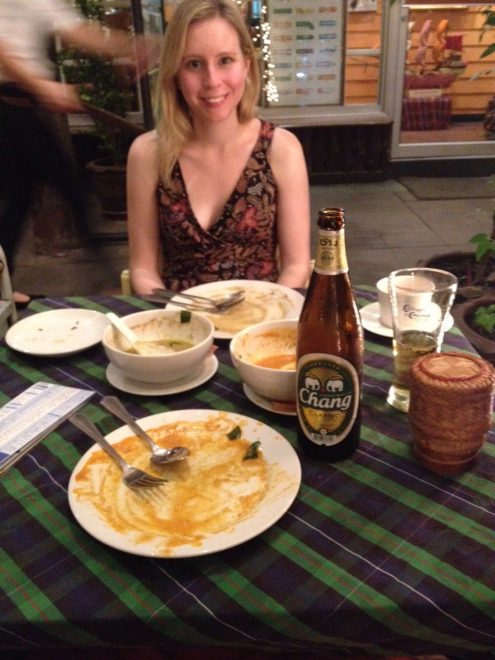 3. Paulaner – Germany. Again, Paulaner is a very good beer, and the best place to enjoy it is in its hometown of Munich. And I’ve tried it in many different situations in Munich, including the standard beer tent with oompah band. But my best Paulaner moment was in the basement bar of a very antipodean hostel in the centre of the city. I’d spent the day on the slow train from Prague and arrived in the city not knowing where to sleep, so it was a relief to find a bunk bed in a shared dorm and a bar with a happy hour that, paradoxically, went on all night. This Paulaner moment was made special by the frustration of the day in contrast with the fantastic Americans, Kiwis and Aussies I met in that bar. Everyone was enjoying Paulaner by the litre at good prices and exchanging stories of their European travels. I stayed in the bar all night I think, I don’t actually remember how the evening ended, but in typical hostel fashion I was woken by someone taking a shower at about 5:30am.

2. Mythos – Greece. It was a hot evening in Athens, a few friends and I had gone down to the beach for the usual time the city nightlife starts to kickoff, about 10pm. Greece is a lager drinkers dream. It can stay at 30C right into the early morning, the bars on the beaches stay open and have a fantastic atmosphere, and you can find places that will sell you a chilled bottle for little more than a euro. Oh, and Greek beer isn’t too bad either. My friends and I pulled up a couple of sun loungers, played cards by the fire light and drank our way through about a crate of Mythos.

1. Pacifico – Mexico. After spending a few days in the relative cool of Mexico City in the mountains, I headed with my would be traveller girlfriend and two of my best friends to the heat and humidity of the Yucatan peninsula. After a fair amount of travelling and a bit of tricky navigation, we found our hotel – a beautiful colonial building in the heart of the stunning city, Merida. We were shown to our rooms and informed that there was a beer for each of us inside which had been chilling all day, and a roof terrace overlooking the city to go and enjoy it on. It was exactly what we needed. We enjoyed our cold beers on the hot terrace and, with some of my favourite people in the world, planned our time in the Yucatan and our road trip to Cancun.

So, overall, I hope you understand the way I enjoy beer. To me, it’s not a case of all you need is a good beer, it’s an enhancer to already fantastic situations. So, if you really like beer, I encourage you to find your favourite people, go to your favourite place and enjoy a few bottles of the local brew. Hopefully you too will find some of your holiday highlights through this simple approach!

What are your favourite beers from around the world? What makes them so special to you?