It’s been five years since I spent New Year’s Eve in New York. Since then, nothing has even come close to matching it. I’ve also been back to New York at other times of the year, but NYE in the Big Apple has to be the best. If you’re planning a visit (or even if you’re not, this might persuade you to do so), here are my Dos and Don’ts for a New Year’s trip to beat all others.

Do embrace the most wonderful time of the year

There’s something so special about the City where so many wonderful Christmas movies have been filmed – Miracle on 34th Street, Home Alone 2, Elf… In New York, you too can witness the magic! See the Christmas lights, go ice skating at the Rockefeller Centre or marvel at the hundreds of Christmas trees across Manhattan. New York City really is one of the most magical places on earth over the Christmas period, and it’s easy to see why.

Times Square hosts the most famous New Year’s Eve party in the world, but it’s not all it’s cracked up to be. Over a million people cram in to the square from 3pm, with no access to public toilets, refreshments, or alcohol. If you can handle all that, you can enjoy live music, celebrity guests and light displays. If only you could see anything other than the back of a stranger’s head… There are ways around it, though. You can get there really early to save a prime spot by One Times Square, but for that, you’re sacrificing your comfort, thirst and hunger. You could also book a hotel room overlooking Times Square, but for that, you’re sacrificing a whole lot of cash.

Do see what the rest of the City has to offer

If being crushed in Times Square doesn’t seem like your cup of tea, do some research to see where else you could bring in the New Year. We spent the night in Central Park instead and had a fantastic time. You can come and go as you please, whilst enjoying an amazing fireworks display, live bands and a wonderful open-air club atmosphere while the countdown is projected on to the Naumburg bandshell. The Park also hosts a midnight run if you prefer exercise over parties.

Don’t expect it to be warm

Oh my god, December in New York can be freezing. Prepare for snow, icy winds and bitter chills. Despite living in England, this trip gave me the coldest temperature I have ever experienced in my life. Remember to pack lots of warm clothes, gloves, coats, scarves, hats… I even wore thermals and I’m not afraid to say it!

Do spend a night on Broadway

Seeing a Broadway show is a must for any visit to New York. We chose Billy Elliot, which was actually a strange choice for us as it’s full of American actors putting on dodgy Northern English accents. That just made it even more entertaining for us, though. There are other equally fantastic things to see, and you can get last minute seats at bargain prices by visiting the tkts booths in Times Square for same day performances.

The Empire State Building is one of the most iconic sights in New York. But like most other things in the City, it can get awfully busy. If you’re still intent on visiting, I’d recommend buying tickets in advance, which you can do at the official ESB website. Some tickets mean you can jump the queue which, if you’re only in New York for a short visit, will be a Godsend. However, you could avoid the queues altogether by visiting the Top of the Rock instead. You get just as good a view, (if not better because you can actually see the Empire State Building), it’s not as busy and it’s cheaper. What’s not to love?

Do unleash your inner kid in the Toys R Us store

Toys R Us on Times Square is home to some wonderful sights. You can see anything and anything made out of lego, an animatronic T-Rex, a life size Barbie dolls house and even a fully functioning indoor ferris wheel! The store is just like a theme park, but completely free! This makes it a great place to get away from the cold when it all gets a bit too much.

It’s very easy to eat too much in New York, especially at breakfast time when a Full English is considered a starter. The portions are so big, it’s tempting to eat a full day’s worth of food in one sitting. But with so many wonderful places to eat, you really should save yourself. One of our favourite meals was a seafood platter at Bubba Gump, complete with side salad, soup and cocktails. We would never have experienced that if we were too full from breakfast!

Do visit Madison Square Gardens to see the Knicks

One of my favourite things to do in New York is watching basketball at Madison Square Gardens. It’s so much fun cheering for the Knicks, wearing a massive foam hand and tucking into a hot dog surrounded by thousands of die-hard fans. If you don’t know much about the sport, I’d recommend reading up on the rules before you go so you can follow a little of what’s going on. You can book tickets in advance from home via Ticketmaster and pick them up at the stadium for a really entertaining night.

New York is a fantastic place to visit, no matter what the time of year. But to see it at its best, you really can’t beat New Year. By following my advice, you’re practically guaranteed a memorable stay. Have you ever been to New York over New Year’s Eve? How did you spend the night? 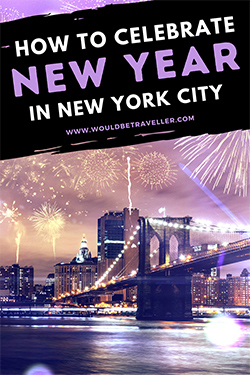 2 thoughts on “How to spend NYE in NYC”