Looking for somewhere different to bring in 2021? Consider spending New Year’s Eve in Athens! There’s plenty to do and something to suit every taste and budget, from parties to chilled evenings with friends and family.

Read on to find out the best ways to spend New Year in Athens, as well as what there is to do, where to eat and the best places to stay in the city on December 31st.

Disclaimer: This post contains affiliate links, which means I may make a small commission if you purchase something after clicking on one of these links. It won’t cost you any more, though! Thank you for supporting me and my blog!

Things to do on New Year’s Eve in Athens

For those who love to dance, one of the city’s big parties will keep you entertained. However, if you just wanted to have a good meal, you could choose from a good selection of set menus offered in hotels and restaurants. Or, if you’d prefer to just watch the fireworks away from the crowds, you can do that too.

For a laid back celebration despite the crowds, head to Syntagma Square for an all-night party in the open air. It’s here they do the big countdown, often led by the town’s mayor, and the square is filled with families and friends alike. The square is often the host to famous DJs spinning tunes all night, free concerts, or there’s sometimes a Ferris wheel or other fairground rides to celebrate too. Once the clock strikes midnight, fireworks will ring out over the city including from Syntagma Square itself.

If you’re more of a party goer, you can dance the year away at one of Athens’ hottest night clubs, in the Gazi neighbourhood. Here you’ll find plenty of bars, clubs and restaurants that all have a great atmosphere on New Year’s Eve.

Alternatively, head to the neighbourhood around the Greek Orthodox Church of St Eirini (also known as Agia Irini Square) to find some of the coolest nightlife in the city, including bars such as 7 Jokers and Clumsies.

Six d.o.g.s is another great option. It’s an all-day ‘cultural centre’ that serves coffee and food in the garden during the day, exhibits art and more in its ‘Project Space’, creates delicious drinks in its bar in the evening and then hosts parties with DJs championing electronic music through the night in its ‘Gig Space’.

If you’re planning on going to a club, just make sure to double check with the club that they’ll actually be hosting a countdown. Most clubs only begin to open or fill up after midnight, as the countdown is traditionally celebrated at home surrounded by friends and family.

You can’t talk about New Year’s Eve in Athens without mentioning bouzoukia! Bouzoukia are nightclubs that have stages where live bands perform traditional Greek music, while the guests dance and sing along.

If you’ve ever heard of smashing plates, this is probably where it all started, with guests throwing plates onto the stage during a show. This was actually banned in the 1970s due to potential injuries, and the custom has been replaced by throwing flowers instead. Much safer!

Going to bouzoukia is a very typical thing for Greeks to do on New Year’s Eve, but it can be a bit overwhelming and confusing for first time visitors and tourists. It also gets quite pricey quite quickly. You have to book a table (often quite far in advance) and then you’re expected to spend a certain amount at the venue on alcohol and flowers to cover your table.

Popular bouzoukia venues in Athens include Posidonio, Alli Fasi and Iifigeneia, but there’s plenty of others for you to choose from too.

In my opinion, nothing beats watching the fireworks that light up the Parthenon on the Acropolis Hill. Isn’t it special, celebrating another year in the place that modern civilisation really began? Just think of the number of new years that place must have seen!

We were lucky enough to see the fireworks from our hotel’s rooftop terrace, The Herodion Hotel, along with a small crowd of other guests. Though if your hotel isn’t in the centre, you’ll be able to see the spectacular display from lots of free, open-air vantage points in the city.

The pedestrian area in the neighbourhood of Thissio, underneath the Acropolis, tends to be where the official celebration takes place, with live music, DJs, performers and, of course, a great view of the fireworks.

Another popular activity on New Year’s Eve is to climb up Lycabettus Hill with a bottle of wine and some bread and cheese from a supermarket. Thankfully, it’s usually still warm enough in Athens to make this a viable option. This will save you a lot of money, as restaurants tend to have expensive menus on New Year’s Eve.

Considering a visit to the Greek capital for New Year? Find out everything you need to know about what to do, where to stay and more reasons to go to Athens in winter. Click here >>

Where/what to eat on New Year’s Eve in Athens

As well as the traditional Greek food served in tavernas, there are lots of international style restaurants and set New Year’s Eve menus for you to stop getting hungry on December 31st.

Wander the streets around the Monastiraki to find traditional Greek tavernas full of locals. Many tavernas host live music on New Year’s Eve along with delicious food, but you’ll probably need to book in advance as the best ones do get very busy.

Psara Taverna, or The Old Tavern of Psarras, is a great option. It’s in the touristy area of Plaka, but hidden in a little side street so it’s away from the main hustle and bustle. On New Year’s Eve, they host live music and dancing for a bit of atmosphere too. There’s a lovely large outside space on a steep hill where it’s possible to catch a glimpse of the Acropolis, but it’s warm and friendly inside too if it gets too cold outside in winter. They serve excellent food, with plenty of traditional dishes and good vegetarian options too.

If you’re left in a pickle without a reservation, try Taverna Plaka in the touristy area of Plaka (hence the name!) It hasn’t got great reviews, but it’s a safe option for a reasonably priced meal on New Year’s Eve itself.

Most hotels in the city put on a special New Year’s set menu, which you can get a peek of before you book on the hotel websites. They can be very expensive and book up relatively quickly, so do your best to book a few months in advance.

Perhaps the most well-known is the Hotel Grande Bretagne, which has dinners and parties all through the festive season. On New Year’s Eve and New Year’s Day, the restaurants in the hotel and its sister hotel, The King George, put on huge set menus that are as expensive as they are filling, so only go for these if you’re hungry!

The Hilton Athens hotel also has an excellent dinner in their Galaxy Restaurant & Bar, with great music, food and even a breakfast to ring in the new year in style!

Many locals spend New Year’s Eve with their families, so quite a few of the restaurants close to allow the staff some time off. However, there are still places that stay open. Just bear in mind that some expect you to have eaten and be out of the restaurant before 12am, so it might not be possible to chow down on a lovely meal at the stroke of midnight.

If you’re after a meal with a view, try Strofi or Dionysos and ask for a table on the rooftop terrace to ogle over the Parthenon while you eat.

It goes without saying that you need to book well in advance. Also, just like the hotel restaurants, many will have set menus and prices for the evening, so ask for details before you book.

Where to stay for New Year’s Eve in Athens

One of the most remarkable things about visiting Athens in winter is that the accommodation is pretty quiet! Most visitors choose to come to Greece during the summer when it’s hot, sunny and very expensive with it. Lucky for those who choose to visit Athens for NYE, you can find great deals on hotels because it’s still considered the ‘off’ season. So no matter what your budget, you’ll find somewhere good to stay.

If you’re looking to spend over £130 per night, consider:

What to do on New Year’s Day in Athens

New Year’s Day in Athens, much like the rest of the world, is a public holiday, meaning you’re likely to find most things closed on 1st January. But don’t fret – there’s still plenty to keep you occupied.

Most bars, restaurants and cafes will be open in the tourist areas of Athens, meaning you won’t go hungry outside of your hotel.

However, you should expect to find the majority of attractions closed, including the temples and museums. While you won’t be able to go in, you’ll still be able to see all the main sites, and you’ll have a great opportunity to wander around the old town without the crowds blocking your photos. Great things to see from outside the gates include the Olympic Stadium, the Temple of Zeus and the Agora.

The Changing of the Guard at the Tomb of the Unknown Soldier will also continue to happen every hour on the hour. That will keep you entertained for a little while at least!

Another favourite thing to do is wander around the pedestrian streets and the little alleys around the foot of the Acropolis. It’s a very peaceful neighbourhood, and climbing the steep steps up the hill is a great way to blow off some of those New Year’s Eve cobwebs!

If you’re heading home on New Year’s Day, public transport will still be running. You should therefore be able to get to the airport safely using the metro! Just be prepared to wait a little while to check out of your hotel if you plan on leaving early in the morning. We had to check out at 5am and rang the bell at the reception to be greeted by staff who had fallen asleep on the desk!

No matter what you choose to do, you’re bound to have an unforgettable night celebrating the new year. So forget London or New York, Athens is the place to be!

Have you ever spent NYE in Greece? I’d love to know what you ended up doing. Let me know in the comments. 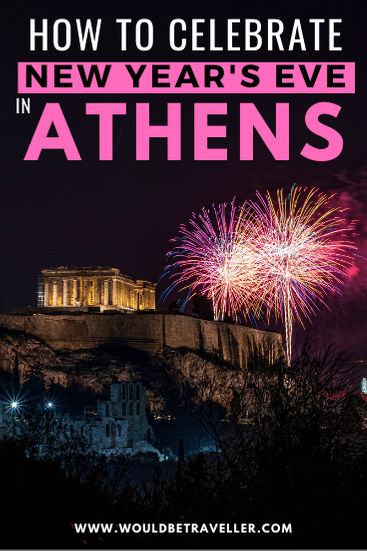 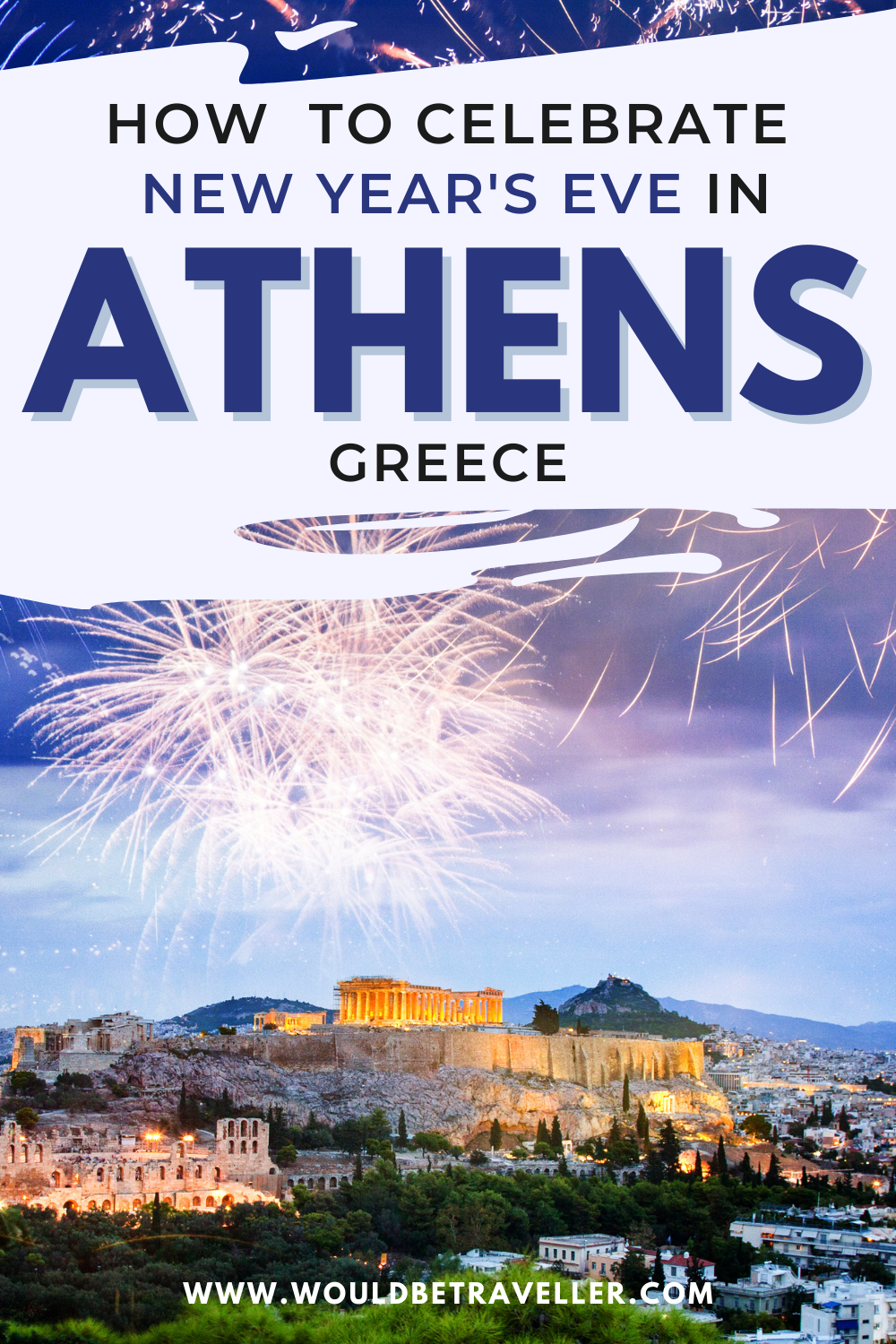 One thought on “New Year’s Eve in Athens: How to celebrate in style”