Discover everything you need to know about seeing tigers in the wild in this Ranthambore travel guide.

There are fewer than 4,000 tigers left in the wild. Over half of them live in India, and Ranthambore National Park is one of the best places to see them.

With the Bengal tiger its national animal, India is doing all it can to conserve the endangered animal population. In 1973, a Government sponsored scheme called Project Tiger was launched to protect the environment they live in, monitor their movements and, critically, foil the efforts of poachers. It has seen some success, with some reserves experiencing enough breeding activity to kick-start growth in other areas of the country.

One of the reserves Project Tiger protects is Ranthambore National Park, which is in the north of the country close to the Golden Triangle tourist circuit. With 31 adult tigers and a few cubs calling it their home, Ranthambore is part of India’s Golden Triangle is one of the best places in India to see tigers in the wild; Yet, you’d still be very lucky to catch a glimpse of one.

Much like everything in India, the park is absolutely beautiful. It’s set in an area of jungle, and is easily identified by the ancient abandoned fort that overlooks the park, giving Ranthambore National Park its name. If you’ve ever seen or read Kipling’s The Jungle Book, you could imagine Mowgli running through the trees, King Louis sitting on his throne and Shere Khan silently stalking his prey. For us, it was the perfect setting for spotting tigers.

Our safari experience was interesting. We had three game drives over two days, all of them in a shared canter, though we longed for a two seater jeep like the one that zipped past us to get the best views.

By the third drive, we had come to learn the safari guide’s routine: the leisurely drive along their preferred route, the secret signal that meant ‘no tigers here’, and the very random toilet break in the middle of the park where you are, very much, at the mercy of nature.

A tiger could literally jump up on you and rip your face off if it wanted to, and at times, I wished it would.

Now, let me tell you about the animals we saw: langur monkeys, deer, mongeese, peacocks, more deer, pigs, a few other birds, did I say deer? We even saw no less than three sloth bears (which are actually rarer than tigers in the park) that kept our carnivorous yearning at bay for a while. But there was only one thing we wanted to see.

I started to think everything was a tiger. The orangey colour the sunlight made as it hit a rock, the growl made by the canter’s engine as it changed gear, even the trees growing straight up in formation started to look like tiger stripes, but alas, no.

On a number of occasions we were told by passing guides they had spotted something in a different area of the park. Each time, we raced on a rollercoaster ride through the park in the direction they pointed us. Most of the time, it was a false alarm. But once, it worked.

Yes, reader, we saw a tiger.

And it was just about the most beautiful thing I’ve ever seen.

Hidden under a tree and its thick foliage lay an adult male tiger. He yawned, stretched and heaved his incredible body up onto his front legs, before lifting up on to all fours.

He then walked ahead of us, his eye-catching black stripes and orange fur now unmistakable against the green jungle surrounding him. He stalked confidently alongside our queue of jeeps, apparently undeterred by the vehicle engines and shrieking humans who couldn’t believe their luck.

Everyone leapt up on to their seats to catch a glimpse, their heads blocking our view. But then, the tiger crossed in front of the traffic, giving us the perfect angle to see his majestic figure as he disappeared back into the undergrowth and into our memories.

Our other two game drives were fruitless, and we heard people who took three game drives but didn’t see a single one. We’ve even heard stories of people who travelled to India three times and have never seen anything.

Sadly, that proves our conservation efforts are not enough (or that the tigers are too good at hiding from us – I hope that’s it). But it’s certain that more needs to be done to put an end to poaching and to safeguard the tigers forever. These beautiful creatures are far too precious to ignore and never see again. And let’s face it, zoos just aren’t the same.

If you’re thinking of visiting Ranthambore National Park to see a tiger, do it soon. Before it’s too late.

Have you ever seen a tiger in the wild? Would you want to? How do you think we can better protect the remaining population? Share your thoughts below. 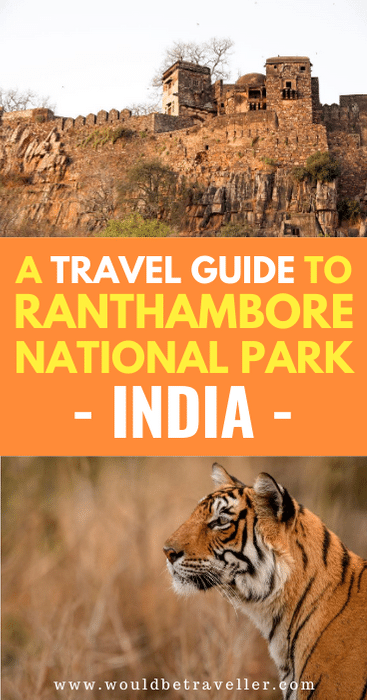