About 40% of the world’s population are monolingual. And that’s genuinely one of the scariest statistics I’ve ever heard. With so many people only speaking one language, how can we expect to understand and be understood by each other?

I’ll admit I used to be one of those people that relied on my mum’s rusty O level French to get me through a weekend in Paris (the most commonly used phrase being “Parlez vous Anglais?”). Yet, as soon as I got to secondary school and was persuaded to learn German, I was hooked. I loved the idea of being able to communicate with another 80.62 million people (that’s the population of Germany dontchaknow) and I felt like a super spy when I overheard German conversations on the street and could decode their secret language. I took my German right through to AS level in college, but then I stopped.

And I don’t know why.

It’s one of my biggest regrets, not keeping it up, and that’s why taking up Spanish as an adult has made me even more determined than ever to become fluent and stay fluent. I’ve now been learning in evening classes for 5 years, I’ve had two private tutors and have twice spent a week in Spain at a Spanish speaking school to get better.

Yet the reasons why I’m learning go far beyond a feeling of self-fulfilment. I’ve listed a few of the many benefits of learning a foreign language below. Some might surprise you, but they’re all sure to get you reaching for a phrase book faster than you can say “Ich lasse das Wasser nicht fleißen wenn Ich mir die Zahne pützen”. Google translate that, my friends!

Learning a language will…

If you learn a language and then visit a country that speaks it, not only will you be able to communicate in an emergency, you will also be able to communicate with the locals on their terms. Too many people assume everyone else speaks English and this is frightening. If you really can’t bring yourself to learn Japanese for a one week trip, at least learn how to say please and thank you! The locals will respond so much better to you – even if it’s by giggling at your mispronunciation of certain words.

There’s no better place to learn a language than in the country it originated from. Ever since I started learning Spanish, I’ve been to at least one Spanish speaking country every year. Not only has this allowed me to practise my language in context with people who are less forgiving than my teacher, but also it’s allowed me to visit some beautiful places. This is one of the main reasons I chose Spanish over any other language. It’s widely spoken in Spain, some Caribbean islands, Central America and many countries in South America – all of which are simply amazing to visit. Now, holidays like these have become essential to my learning (at least that’s how I justify the air fare to my husband!)

If you learn in a classroom, your fellow students can make great friends as you see each other regularly and have something in common: a love of learning! If you have a private tutor, you never know what you might find out about each other. My tutor and I have a mutual love of the Backstreet Boys, and we were both brave enough to admit it!

Of course, you’ll also meet new people when travelling. You’re much more likely to make friends in hostels if you speak the same language as them, or strike up a conversation at a bar with the barman if you’re both practising each other’s language.

Believe it or not, this one actually comes with scientific proof! Last year, a study by Georgetown University found that speaking more than one language increases the size of the part of the brain responsible for attention span and short term memory. So, what are you waiting for?!

I’ve studied Spanish grammar in 100x more depth than I ever did in English at school. However, learning about the imperfect subjunctive and pluscuamperfect tenses in Spanish has made me question the use of grammar in my own native tongue. I can honestly say I truly understand English and the weird way it’s put together much better now.

Teach you about a new culture

From reading text books and speaking to native speakers, not only am I learning the nitty gritty grammar, I’m also learning a helluva lot about life in Spain: the things Spaniards like, their Christmas traditions, the way they live… And in the last lesson of each term, we get together to share Spanish tapas and play traditional Spanish games. I wouldn’t have a clue what they were without my college!

Make you much more employable

Speaking another language opens up so many employability doors by demonstrating your capability for broadening your horizons and self-study – things that employers are begging for at the moment. Your dream job may even demand it – who do you think would get the job of a French-speaking customer service agent? The guy that flunked out of French at school, or the one who is learning French from scratch in evening classes?

Mean you could live abroad one day

Don’t be that Brit that moves to Spain and expects everyone to speak English to you. By learning Spanish before you go, you would be much better able to integrate with the local community and actually feel like you belong there.

You can understand foreign movies and television

One of my favourite things to do is watch Spanish TV and try and work out what’s going on. Even if I don’t understand every word, the actor’s faces in telenovelas tell you exactly what you need to know. Basically, that guy with the hairy chest has cheated on his wife and his girlfriend is having his brother’s baby*. I always get a huge boost of confidence when I recognise a word or phrase, so not only am I enjoying the series, but learning at the same time! Win win.

Tips for getting started

Now, you’re convinced, but what’s the best way to get started? Thankfully there are loads of different options, and you’re bound to find one that suits your bank balance and lifestyle. No time? Listen to a phrasebook CD on your morning commute. No money? Download a free app. It really is that easy! Here are some other ideas:

I genuinely can’t think of a reason why you wouldn’t learn a language… if you can read this, you managed to learn English so you definitely have the ability. Give it a go!

Do you speak any other languages? What are your top tips for learning? 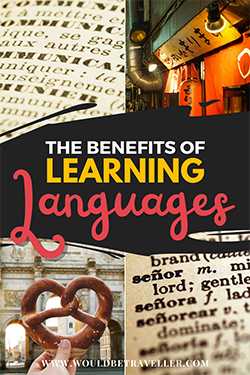