Despite being Jordan’s largest city, the bright lights of Amman are often overlooked by tourists desperate to reach Petra or the Dead Sea as fast as possible. Of course Jordan has plenty of other places worth visiting but did you know there are lots of things to do in Amman too? From ancient Roman ruins and beautiful Mosques, to bustling streets and restaurants serving delicious food, this post shows you what to see in Amman – Jordan’s capital.

The 12 Best Things to do in Amman, Jordan

The Citadel often tops lists of places to visit in Amman, thanks to the city’s previous position as one of the most important settlements back in Roman times. Yet, it’s not just Roman: it’s actually one of the oldest continually inhabited settlements through the Roman, Byzantine and Umayyad periods. Artefacts found through excavations of the Citadel have even dated as far back as the Middle Bronze Age (1650BC)!

Nowadays, the Citadel is in ruins but it’s still possible to see columns from the Temple of Hercules as well as a giant hand from his statue. You can also wander in the old Umayyad Palace, which was built in the 8th century.

The Amman Citadel is located at the top of a pretty steep hill. It’s possible to walk up, and I highly recommend you do because not only will you get a great sense of achievement from completing the hike, but you also get great views out over Amman from the way up.

Tickets to the Citadel cost 3JD, and you can pick up your tickets from the entrance. There’s no need to book in advance.

>> If Amman is just the start of your trip to Jordan, read my 1 week in Jordan itinerary for more inspiration. Click here!

Go to the Jordan Archaeological Museum

The Jordan Archaeological Museum is also based in the Citadel, and entrance is included in your ticket. It’s a great place to go if you’re a fan of history, as the museum is full of artefacts dating from prehistoric times right up to the 15th century. From broken pots and decorative statues, to historic documents and even human remains, there’s plenty to look at. Plus, with very little shade available at the Citadel, the Jordan Archaeological Museum is one of the best places in Amman to get out of the blazing sun!

The Roman Theatre dates back to the 2nd century AD where it used to seat 6,000 people for dramatic plays and festivals. You can climb the steps up to the top to enjoy the view, sit on one of the seats to imagine being a theatre-goer or simply people watch the locals who use it as their hangout. There’s a couple of small museums inside the theatre too which are also included in your ticket. 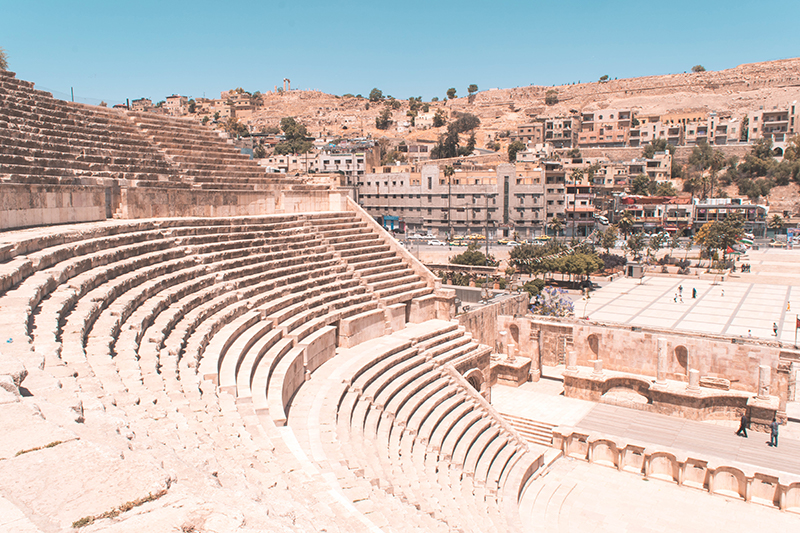 You can buy your entrance ticket from the office on the opposite side of the square. See that tiny grey booth in the photo? That’s it! Tickets cost 2JD each.

Rainbow Street is one of the best streets in Amman for shopping for souvenirs and eating at the many cafes and restaurants. It’s a favourite amongst locals and tourists alike. We visited Amman during Ramadan, so the street wasn’t very lively during the fast, but strolling along the street is usually one of the most fun things to do in Amman! There are ice cream shops aplenty, so once you’ve had your fill of delicious food from one of the local restaurants, you can finish it all off with some of the best ice creams in the country!

The Center promotes ecotourism by sharing responsible travel tips and activities, and its strong recycling programme makes it one of the most eco-friendly places to go in Amman too. It’s a dream for ethical travellers!

>> Check the latest prices for places to stay in Amman on booking.com. Click here!

Take a day trip to Jerash

If you’re looking for the best day trips from Amman, Jerash should be in your top things to do list! Jerash is just 30 miles north of Amman, and is totally worth a visit. Here, you can learn about Jordan’s Roman past in one of the most important Roman settlements in the Middle East. Spend a couple of hours admiring Jerash’s impressive amphitheatre and ruined buildings, as well as the original mosaic floors and columns lining the impressive Forum (the main square). 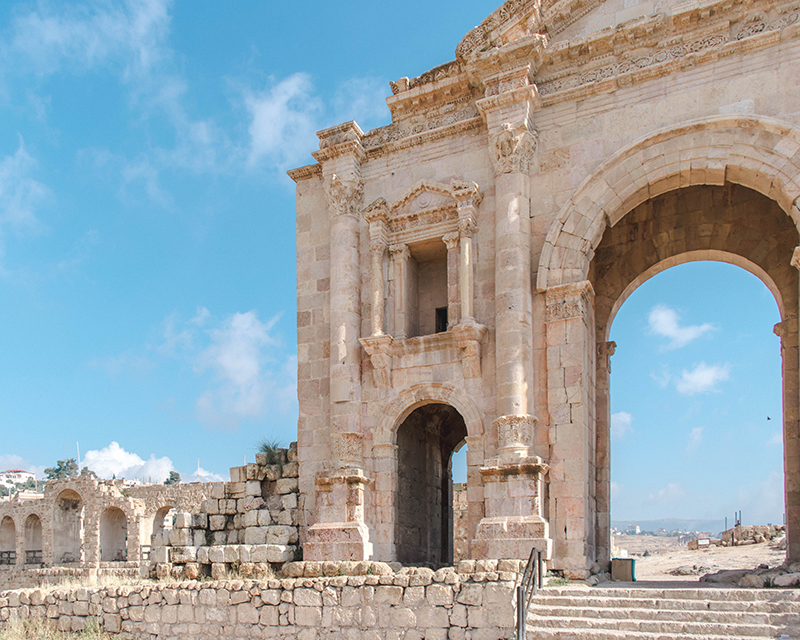 If you’re a history buff, I highly recommend hiring a guide for your day trip to Jerash to really bring the place to life. There are often guides available at the entrance, ready to give you a day tour if you didn’t arrive as part of a guided tour group.

Tickets to Jerash cost 10JD, but guided tours and optional extras (such as the sound and light show) will be more. You can take an Uber from Amman to Jerash, but there’s also a regular bus service from Amman’s North Terminal Bus Station for just 1JD.

Eat with locals at Hashem

If you’re looking for local places in Amman to eat, Hashem is super cheap, friendly and clean. Crowds of tourists and locals congregate at this open-air restaurant in downtown Amman to enjoy a hearty meal. Don’t let the plastic tables and chairs put you off – what the restaurant lacks in style, it certainly makes up for in excellent, authentically Middle Eastern food.

Ask the waiters to bring you a selection of everything, and you’ll be given a warm, soft pitta bread, two types of falafel (the larger stuffed falafel balls are incredible), hummus, salads and pickles. We ate here twice, both at the beginning and end of our 1 week in Jordan, but never spent more than 5JD for us both (that’s less than £5). And if you’re vegetarian, you’ll be well-catered for – I couldn’t see anything that had meat in it at all. I could have eaten there for the rest of my life and been happy!

>> Hashem is also a fantastic place to break the fast in Ramadan. Find out all you need to know about visiting Jordan during Ramadan as a tourist in my dedicated post. Click here to read it!

Jafra is a relaxed cafe, full of locals smoking shisha throughout the day and into the evening. For just over 4JD, you can try Jafra’s classic shisha blend or ask for one of their flavoured options.

Beyond the shisha, Jafra is another good place to eat in Amman, with delicious food in a more stylish setting than Hashem. The menu is extensive, with vegetarian options including breads, pastries, pizzas and hummus, as well as local meat dishes cooked in clay pots or on the grill. It’s quite expensive compared to most cafe in Amman, but it’s still worth visiting if you like eating somewhere with a good atmosphere (and don’t mind the shisha smoke!)

Just around the corner from Jafra on King Faisal Street is the Al Shamasi umbrella street art installation. Very few tourists seem to know about the umbrella stairs, so you’re likely to be able to enjoy them and get some good photos without large crowds blocking your view.

The colourful umbrellas were a little tatty when we visited in mid-2018, but they’re regularly removed and replaced meaning there’s a small chance they won’t be there when you go. If they aren’t, try again the next day because you never know! 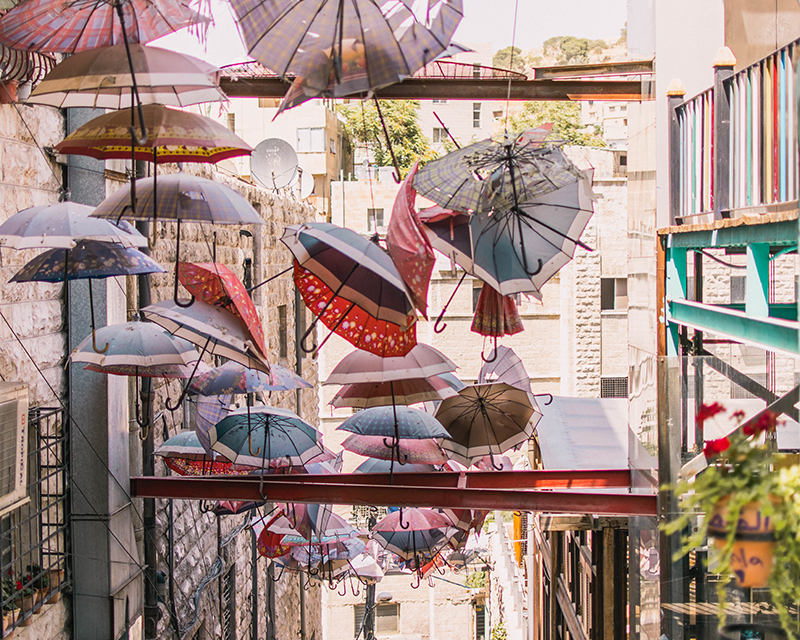 Habibah Sweets is the best place in Amman to get kanafeh – a dessert made of a mild goat cheese, topped with shredded wheat, sugar syrup and pistachios, similar to baklava. It might sound strange, but is actually delicious and very rich! Habibah serves up large portions of kanafeh as well as other sweet treats from its small shop in downtown Amman next to Al Bank Al Arabi. There are always long queues down the street during the day and evening, but any wait is worth it.

You’ll need to pay for your food at the little kiosk out the front, and then pick up your order from inside the shop. There are no tables inside, but you can eat your kanafeh on the street, or by sitting on the stone bollards just outside Habibah. The portions are huge and easily enough for two, especially if you’ve already eaten a big meal, so don’t be afraid to share. You can always have another one the next day, and trust me – you’ll want one!

King Abdullah I Mosque is one of the most beautiful places in Amman for worship, with a large dome 35m in diameter, decorated in blue tiles. It can hold 7,000 people for prayer inside, with a small women’s prayer hall for 500 women too. It welcomes non-Muslim visitors outside of prayer time, as long as they respect the dress code of covered knees for men, and covered heads, arms and legs for women. Headscarves and full-length dresses are available to borrow from the mosque if you forget your own. You’ll also need to remove your shoes before entering the prayer hall.

Visitors can admire the mosque’s beautiful architecture and view the artefacts inside the Islamic Museum. Here, you can see some of the personal belongings of King Abdullah I as well as pieces of pottery, coins and engravings too.

The mosque is a little out of the centre of Amman, but still very easy to travel to via Uber. Entrance is free.

If this post has helped you understand what to see in Amman, Jordan, but you still want to learn more, consider taking a locally led tour by a local expert. Get Your Guide has some excellent tours to choose from, with many of the Amman attractions included in this list covered as part of the tour.

>> Check the Amman City Tour itineraries on Get Your Guide now. Click here!

Are you now thinking twice about skipping Amman and heading straight for Petra or Wadi Rum? There really is so much to Jordan’s capital that makes it a worthy tourist destination in and of itself.

What are your favourite things to do in Amman, Jordan? If you’ve been, I’d love to hear your thoughts in the comments below! 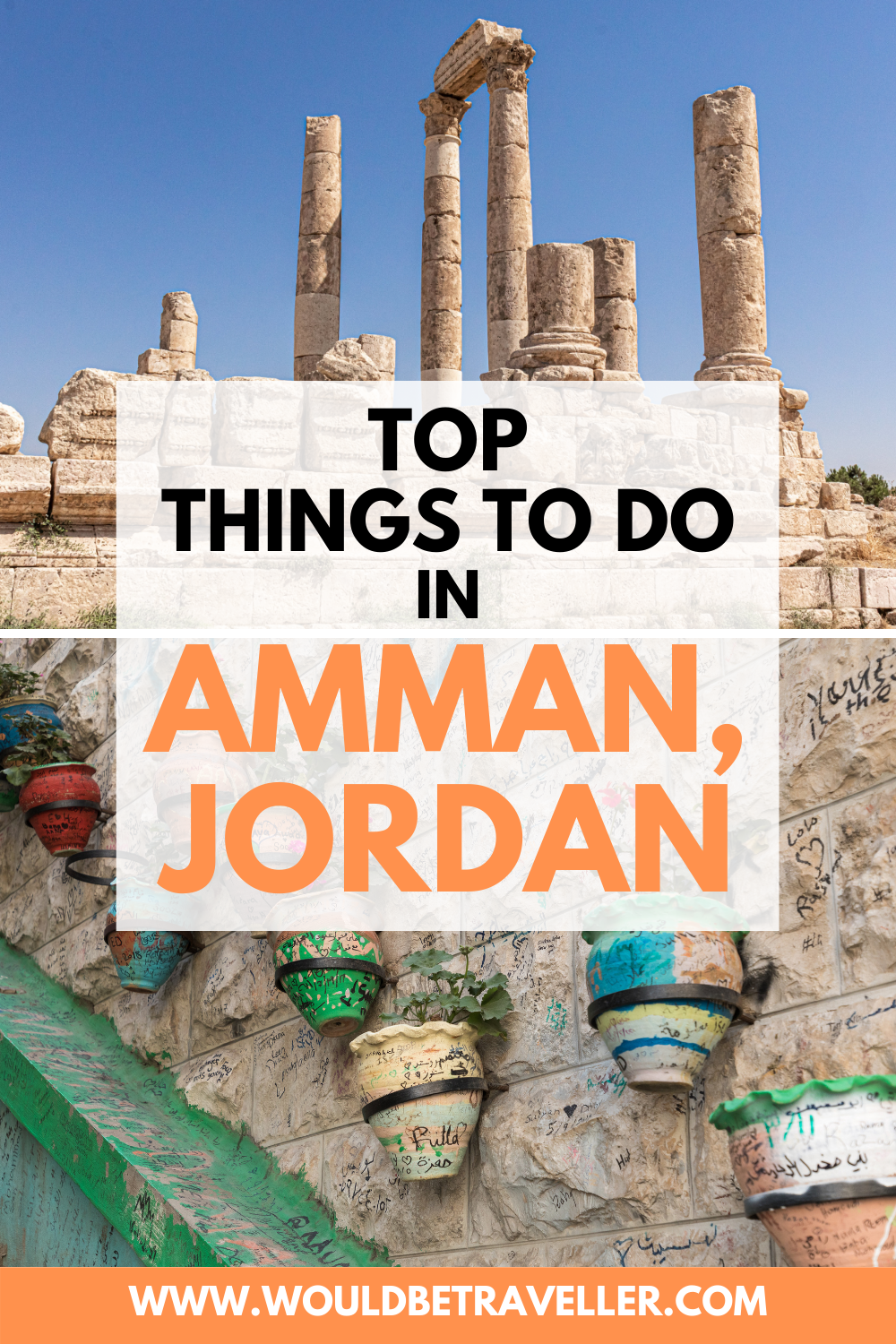