If you’ve ever planned a trip to India, you’ve probably heard of the Golden Triangle. No, it’s not a flavour of Quality Street, but a well-trodden path through India’s three major cities of Delhi, Agra and Jaipur. Easily accessible by expressways and major roads, the total circuit is 720km long and characterised by beautiful landscapes and drivers that should be constrained to dodgems.

Having just returned from a tour of the Golden Triangle, we can safely say that nothing can quite prepare your senses for it. India is a riot of sights, sounds, smells and tastes that you’ll be hard-pressed to find anywhere else in the world, and the Golden Triangle is a great place to start.

Here’s what we saw on our three sided trip.

India’s capital is the world’s third most populated city behind Tokyo and Jakarta, and it certainly feels like it. As soon as you step outside the tranquility of your hotel, you’re transported to the noisiest, busiest and smelliest streets in the world. Think Oxford Street on Christmas Eve, only add motorbikes and tuktuks to the pavements.

The city is one of huge contrast. The old half, cleverly named Old Delhi, is a jumble of stone walls and buildings in a part of the city first founded in the 17th century. Conversely, New Delhi was designed by British architects in the 20th century and is typified by wide, tree-lined streets and modern buildings. Yet in both halves, Delhi is blessed with some incredible sights.

Our first stop was the Red Fort, a UNESCO World Heritage Site and the former residence of Moghul emperors until 1857. It gets its name from the red sandstone making up the numerous buildings within its defensive walls.

Next up, the most exhilarating ride of my life: a rickshaw ride through the streets of Old Delhi. We were warned to hold onto our belongings as we sped through narrow lanes, desperately trying not to collide with the locals rocketing towards us. In comparison, Jama Masjid, one of the largest mosques in India, was a relative oasis. We covered up in robes to explore the beautiful building that can house 25,000 people for prayer.

After lunch, we headed to Humayun’s Tomb, which is the final resting place of Moghul Emperor Humayun, commissioned by his son in 1569. It’s another stunning structure, typical of Moghul architecture with domes and archways set out in perfect symmetry.

With a jam-packed itinerary, Delhi had certainly started our Golden Triangle tour off in style.

Agra – Home of the Taj Mahal

The drive out of Delhi towards Agra was a bit of a nightmare. Thanks to the heaving rush hour traffic, it took us two hours to get out the other side of the city and on to the expressway. But reaching Agra three hours later made it totally worth it.

Of course, the jewel in Agra’s crown is the Taj Mahal. Our guide pointed it out to us on the road, but we were determined not to look until we were right in front of it. And we were very glad we didn’t.

It’s one of those places you dream of seeing, and I actually welled up to see it with my own eyes instead of on the TV. The building is perfectly symmetrical, except for the tombstone of Emperor Shah Jahan set next to his beloved wife in the centre. We stayed until sunset, which gave us enough time to study the intricate marble carvings and semi-precious stones laid into the walls.

The next morning, we visited Agra Fort which was where Shah Jahan was placed under house arrest after his son declared him unfit to rule. High up on a hill, it’s got a magnificent view of the Taj Mahal that, due to the smog, makes it look incredibly eerie and almost mystical. The fort itself is very typical of Moghul architecture – lots of pillars, stone walls with intricate carvings and apartments set around wide open courtyards.

On our way to Jaipur, we stopped off at Fatehpur Sikri, an ancient Moghul city that was abandoned in 1587 after its freshwater supply was exhausted. It’s another UNESCO World Heritage Site (you really rack them up in this part of the world!) with the usual apartments and a deep, scarily green swimming pool that locals will jump into for 100 rupees. I wouldn’t recommend it.

The final point of our Golden Triangle trip was Jaipur, where we visited the stunning Amber Fort. I’ll admit – by now, I was getting a bit bored with beautiful buildings. They were still obviously attractive, but the architecture was getting a bit samey and they didn’t feel that special any more. Yet, the Amber Fort completely brought the magic back.

High up on a hill overlooking the city, the Fort is accessible via jeeps, elephants (sadly) or a pretty steep hike up through winding lanes. It’s laid out over four levels, with buildings made out of carved stone, marble and semi-precious stones. Of course, it’s another very well-deserving UNESCO World Heritage Site. Much like all sites in the country, it’s incredibly busy and we even bumped into Murad Osmann on his ‘Follow Me To’ tour of India.

Next, we visited Jaipur’s City Palace that houses a collection of the Maharaja’s clothes and other belongings including the world’s largest silver water container! The palace complex features buildings with beautifully painted walls, temples and gardens. Just across the street, Jantar Mantar is an observatory housing 19 astronomical instruments, including the world’s largest stone sundial. Gosh these claims to fame are exciting, aren’t they?

After dinner, we walked into the market when it was beautifully lit up for Diwali. Thousands of locals were out on the streets buying festival decorations, gifts and food as we negotiated our way through the crowds, motorbikes and cows. Yes, cows.

Following our Golden Triangle circuit, we went on to Ranthambore National Park in search of tigers, but that deserves a blog post of its own… Coming soon!

Overall, the Golden Triangle is a rite of passage for travellers to India, and certainly, somewhere everyone should go at least once in their lives. For me, it was the perfect way to start our Indian adventure. Have you been to India’s Golden Triangle? What did you see while you were there? 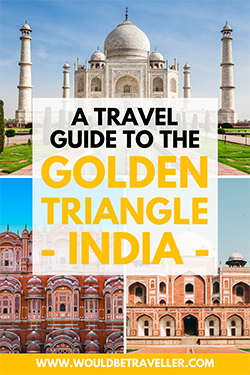