I used to hate September. When I was a schoolgirl, September saw me suffering from the back-to-school blues. When I started my job, September saw me suffering from the back-to-work blues. But now, I’ve been able to avoid the inevitable back-to-work blues by packing my bags and seeing where the wind takes me. And that’s what makes September the best month of the year to travel. Think about it. The screaming kids are back at school, the tourist crowds have dissipated, and skyrocket prices have given way to last minute deals. What’s more, September brings some wonderful conditions across the world that makes it even more irresistible…

South Africa’s dry season runs from May – September and is one of the best times to see wildlife in the national parks. Due to the lack of rain, the animals tend to congregate around watering holes and can’t hide from you behind bushy vegetation. This makes it much easier to spot some of the more elusive species that would otherwise flee at any sign of a tourist’s jeep. Plus with so many people back at work and school, the tracks are much emptier giving you the freedom to roam.

Despite still being incredibly warm, Northern Africa sees a drop in temperature over the month of September. This makes countries such as Morocco or Egypt a great choice for travellers who aren’t quite ready to say goodbye to summer just yet. Also, if you’re visiting Muslim countries, September is the month of Ramadan meaning you’re more likely to get a table at the most popular restaurants as the locals abstain from food during the day.

Dry and mild weather in Europe

Europe is at its absolute best in September. It’s the month it’s least likely to rain, which if you’ve ever been caught in a Great British downpour or Croatian thunderstorm, you’ll know is a good thing. And with mild temperatures across a large part of the continent, you’ll still see the benefits of summer without the crowds or having to pay for them. Consider a long weekend in Spain, a few nights exploring the Italian riviera, or go crazy and do a full-on tour of the whole thing!

First chance to catch the Northern Lights in the Arctic Circle

Though not at their brightest, the Northern Lights will start to be seen in September. Plus, it won’t be cold enough for snow and temperatures can still achieve an almost tropical 8 degrees c! And while there’s only about 5 hours of sunshine a day, that still leaves 19 hours to see the aurora borealis.

End of the humidity in Asia

Although September can see some pretty hefty downpours in some parts of Asia (Thailand, I’m looking at you!), the last true summer month also sees the end of stifling humidity across much of the continent. Your best bets are China and Japan, where autumn sets in and you’re treated to bright red leaves in the trees and cooler air temperatures. Honourable mentions too go to India and Sri Lanka, where the monsoons are yet to start. Just be warned that Yala National Park in Sri Lanka is normally closed in September, so you might be better off waiting if you want to see the best of the country’s wildlife.

While most of the world seems to be cooling down in September, Australia and New Zealand are just starting to warm up! Spring brings more sunshine, blossoming plants and flowers and outdoor festivals and events. It’s also a great time to go whale spotting as the beautiful animals migrate from the cold waters in Antarctica to the more temperate waters in Australia. Whale watching is great across most coastal areas of Australia in September, except Victoria!

You’ll have seen photos of the orange leaves, crunchy twigs and malting trees in New England, well September is your chance to see them in real-life. It’s also a great time to visit the states you would otherwise avoid in the height of summer thanks to their blistering heat, as the temperature drops as much as the prices. The jewel in Northern America’s crown during September has to be Canada. The weather in comfortable and the autumnal scenery is even more spectacular than New England.

September is a month of balance in South America. The weather is typically dry and gradually milder, yet being such a vast continent, this can vary dramatically. The peak season for hiking the Inca Trail is over by the time September comes around, and most destinations experience falling prices as its visitors return home to work and school.

Now all we need is for someone to invent a time machine so that we can be in all these places at once…Where do you like to go in September? Have I missed any highlights? 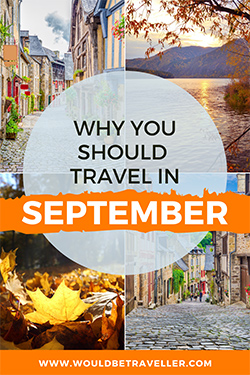