Mexicans need no excuse for a party and today marks the end of one of the most important. With it playing a big part in one of the latest James Bond movies, Spectre, Día de Los Muertos is now recognised across the world. But what is Día de los Muertos?

Día de Los Muertos (or Day of the Dead to us Anglophiles) is a celebration of friends and loved ones that are no longer with us. Celebrated every year between 1st and 2nd November, it is made up of street parties, parades and traditions that remind you of those that have passed. Traditions include sharing memories about the deceased, eating their favourite food, buying sugar skulls and decorating homemade altars with candles, photos and flowers.

Despite their supposed similarities, Día de los Muertos, in my opinion, is a much more worthwhile celebration than the trick or treaters and gruesome costumes of Halloween. Granted, people still dress up for the occasion, but there’s something so much classier about it, don’t you think?

In 2012, we were in Mexico City during the run up to the festival – we saw preparations being made, decorations put up and sugar skull souvenirs sold in shops. One tradition we did try was eating Pan de Muertos – Bread of the Dead. It’s a sweet bread that reminded me of iced buns, only decorated with bone-shaped dough and topped with sugar. The one we tried in Merida was flavoured with orange water – give me that over candy corn any day!

Have you ever celebrated Día de los Muertos? Do you prefer it to Halloween? 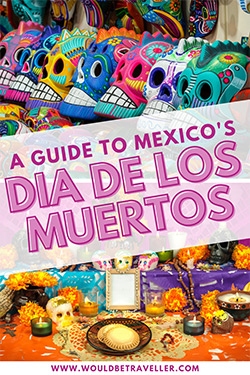